Notice: Much of this post still applies, but now applies more directly to Citus. Since this post originally published, pg_shard is now deprecated. You can find some further guidance for sharding on the Citus blog and docs

Back in 2012 I wrote an overview of database sharding. Since then I’ve had a few questions about it, which have really increased in frequency over the last two months. As a result I thought I’d do a deeper dive with some actual hands on for sharding. Though for this hands on, because I do value my time I’m going to take advantage of pg_shard rather than creating mechanisms from scratch.

For those unfamiliar pg_shard is an open source extension from Citus data who has a commerical product that you can think of is pg_shard++ (and probably much more). Pg_shard adds a little extra to let data automatically distribute to other Postgres tables (logical shards) and Postgres databases/instances (physical shards) thus letting you outgrow a single Postgres node pretty simply.

Alright, enough talk about it, let’s get things up and running.

The rest assume you have Postgres.app, version 9.5 setup and are on a Mac, much of these steps could be easily adapted for other Postgres installs or OSes.

Then create a file in /Users/craig/Library/Application\ Support/Postgres/var-9.5/pg_worker_list.conf where craig is your username:

Then edit that postgresql.conf inside that newly created folder with two main edits:

Finally setup our database then start it up:

Now you should have two running instances of Postgres, now let’s finally turn on the pg_shard extension, create some tables and see what we have. First connect to your main running Postgres instance, so in this case the the instagram database we first created psql instagram, then let’s set things up:

So that was a lot of initial setup. But now we have an application that could in theory scale to a shared application across 16 instances. If you want a refresher, there’s a difference between physical and logical shards. In this case above we have 16 logical ones and it’s replicated across 2 physical Postgres instances albeit on the same instance.

Alright so a little more poking under the covers to see what happened before we actually start doing something with our data. If you’re still connected go ahead and run \d, and you should see:

You can see that under the cover there’s a lot more customer_reviews tables, in reality you don’t have to think about these or do anything with them. But just for reference they’re just plain ole Postgres tables under the cover. You can query them and poke at the data. The now mystical customer_reviews will actually roll up the data across all your logical shards (tables) and physical shards (spanning across machines).

It’s also of note that in production you might not actually use your primary DB as a worker, we did this more for expediency in setting it up on a local Mac. More typically you’d have 2 or more workers which are not the same a the primary, these were the ports we setup in our pg_worker_list.conf. A common setup would look something more like: 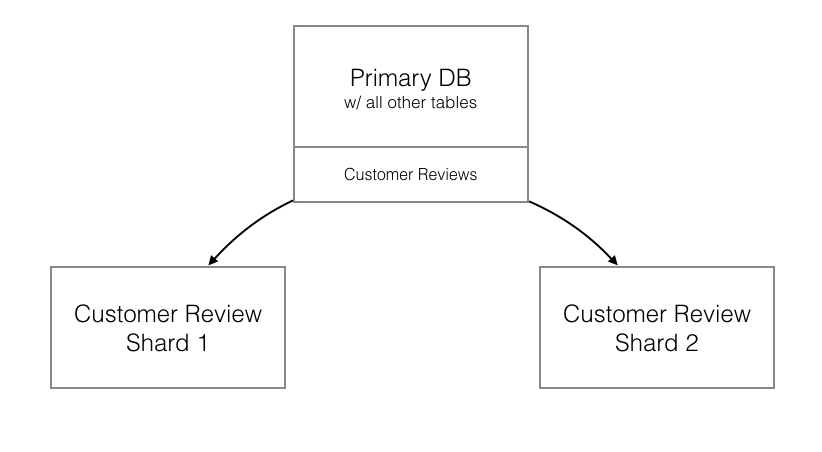 So now start inserting away:

For extra homework on your own you can now go and poke at where the underlying data actually surfaced.

Yes, there’s a number of limitations that you can learn a bit more about over on the github repo for pg_shard. Though even with those it’s very usable as is, and let’s you get quite far in prepping an app for sharding. While I will say that all apps think they’ll need sharding and few actually do, given pg_shard it’s minimal extra effort now to plan for such scaling should you need it.

Up next we’ll look at how it’d work with a few languages, so you can get an idea of the end to end experience.